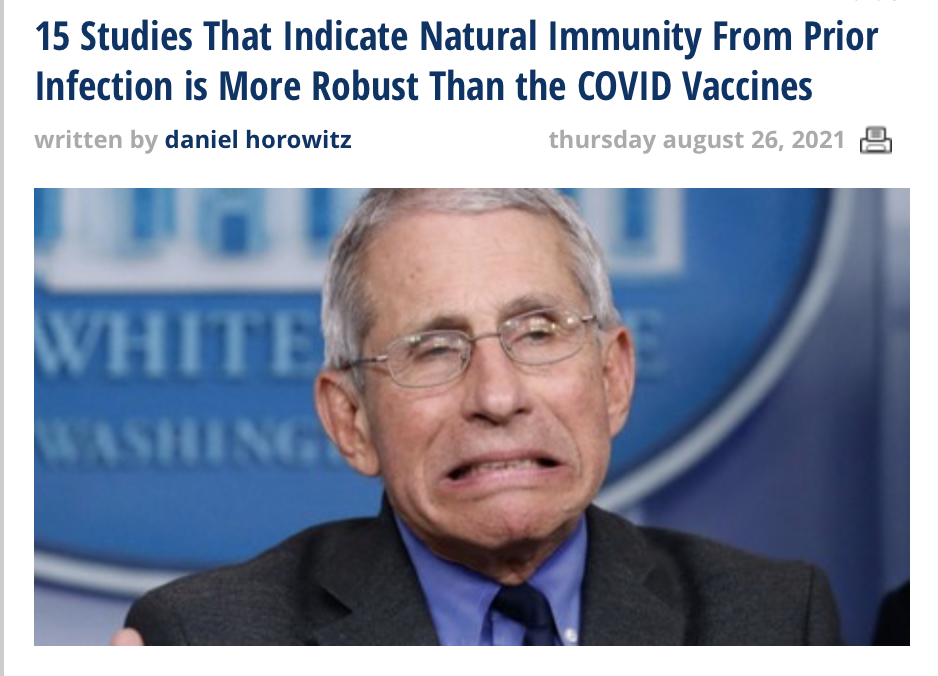 Great article from Dan Horowitz from http://www.ronpaulinstitute.org/ sharing the scientific papers that show natural immunity is more robust than immunity from the experimental jabs:

It’s the 800-pound gorilla in the pandemic. The debate over forced vaccination with an ever-waning vaccine is cresting right around the time when the debate should be moot for a lot of people. Among the most fraudulent messages of the CDC’s campaign of deceit is to force the vaccine on those with prior infection, who have a greater degree of protection against all versions of the virus than those with any of the vaccines. It’s time to set the record straight once and for all that natural immunity to SARS-CoV-2 is broader, more durable, and longer-lasting than any of the shots on the market today. Our policies must reflect that reality.

It should be noted that this exercise is not even necessary now that our own government concedes that immunity from the vaccines, particularly the Pfizer shot, wanes each month. With the Mayo Clinic researchers suggesting, based on old data that likely got even worse since, that Pfizer’s efficacy against infection is only 42%, there is no reason to even attempt to compare this degree of immunity to the near-perfect immunity of prior infection, even against Delta. It should be obvious to any intellectually honest person that an unvaccinated individual with prior infection is exponentially safer to be around than someone who had the vaccines but not prior infection.

Remember, a significant portion of the population already got infected, and when the latest Delta wave is over in the South, the region will likely reach clear supermajorities of the population with immunity, as was found in India following the circulation of this very contagious strain of the virus.

Now consider the fact that studies have shown those with prior infection are associated with 4.4x increased odds of clinically significant side effects following mRNA vaccination. Thus, it is as scandalous as it is unnecessary to vaccinate those with prior infection, even if one supports vaccination for those without prior immunity. But as you can imagine, that would take a massive share of the market off the table from the greedy hands of Big Pharma.

To that end, it’s important to clarify once and for all, based on the current academic literature, that yes, people with prior infection are indeed immune, more so than those with vaccines. Here is just a small list of some of the more recent studies, which demonstrate the effectiveness of natural immunity — even from mild infection — much later into the pandemic than the study window of the vaccines:

The authors studied the contrast between vaccine immunity and immunity from prior infection as it relates to stimulating the innate T-cell immunity, which is more durable than adaptive immunity through antibodies alone. They concluded, “In COVID-19 patients, immune responses were characterized by a highly augmented interferon response which was largely absent in vaccine recipients. Increased interferon signaling likely contributed to the observed dramatic upregulation of cytotoxic genes in the peripheral T cells and innate-like lymphocytes in patients but not in immunized subjects.”

The study further notes: “Analysis of B and T cell receptor repertoires revealed that while the majority of clonal B and T cells in COVID-19 patients were effector cells, in vaccine recipients clonally expanded cells were primarily circulating memory cells.” What this means in plain English is that effector cells trigger an innate response that is quicker and more durable, whereas memory response requires an adaptive mode that is slower to respond. Natural immunity conveys much more innate immunity, while the vaccine mainly stimulates adaptive immunity.

The media scared people last year into thinking that if antibody levels wane, it means their immunity is weakening, as we are indeed seeing with the vaccines today. But as Nature wrote, “People who recover [even] from mild COVID-19 have bone-marrow cells that can churn out antibodies for decades.” Thus, aside from the robust T-cell memory that is likely lacking from most or all vaccinated individuals, prior infection creates memory B cells that “patrol the blood for reinfection, while bone marrow plasma cells (BMPCs) hide away in bones, trickling out antibodies for decades” as needed.

It’s therefore not surprising that early on in the pandemic, an in-vitro study in Singapore found the immunity against SARS-CoV-2 to last even 17 years later from SARS-1-infected patients who never even had COVID-19.

In a study of 1,359 previously infected health care workers in the Cleveland Clinic system, not a single one of them was reinfected 10 months into the pandemic, despite some of these individuals being around COVID-positive patients more than the regular population.

The study found that most recovered patients produced durable antibodies, memory B cells, and durable polyfunctional CD4 and CD8 T cells, which target multiple parts of the virus. “Taken together, these results suggest that broad and effective immunity may persist long-term in recovered COVID-19 patients,” concluded the authors. In other words, unlike with the vaccines, no boosters are required to assist natural immunity.

The authors conclude: “Natural infection induced expansion of larger CD8 T cell clones occupied distinct clusters, likely due to the recognition of a broader set of viral epitopes presented by the virus not seen in the mRNA vaccine” (emphasis added).

Conclusion: “In infection-naïve individuals, the second dose boosted the quantity but not quality of the T cell response, while in convalescents the second dose helped neither. Spike-specific T cells from convalescent vaccinees differed strikingly from those of infection-naïve vaccinees, with phenotypic features suggesting superior long-term persistence and ability to home to the respiratory tract including the nasopharynx.”

Given that we know the virus spreads through the nasopharynx, the fact that natural infection conveys much stronger mucosal immunity makes it clear that the previously infected are much safer to be around than infection-naive people with the vaccine. The fact that this study artfully couched the choices between vaccinated naive people and vaccinated recovered rather than just plain recovered doesn’t change the fact that it’s the prior infection, not the vaccine, conveying mucosal immunity. In fact, studies now show that infected vaccinated people contain just as much viral load in their nasopharynx as those unvaccinated, a clearly unmistakable conclusion from the virus spreading wildly in many areas with nearly every adult vaccinated.

Aside from more robust T cell and memory B cell immunity, which is more important than antibody levels, Israeli researchers found that antibodies wane slower among those with prior infection. “In vaccinated subjects, antibody titers decreased by up to 40% each subsequent month while in convalescents they decreased by less than 5% per month.”