How Does Stress Affect Your Ability to Reduce Body Fat? – Part 3

Well, when someone has adrenal fatigue, they are in state of mal-adaptation to stress. What is happening hormonally is that some of the master hormone pregnenolone, instead of making DHEA, which is the precursor to the sex hormones (testosterone and estrogens), which are also the growth and repair hormones, is being stolen to make progesterone. And Progesterone is a precursor to cortisol. 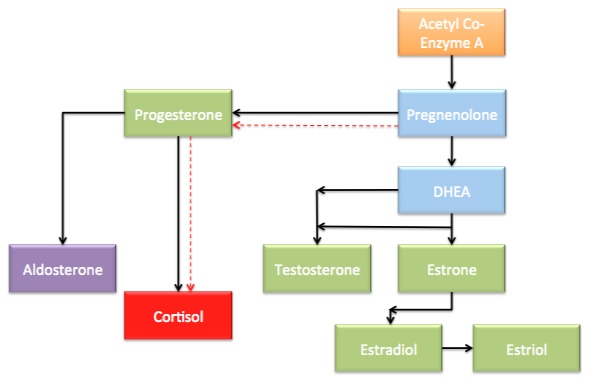 So if you think of the hormonal pathway as a dual carriageway. The growth and repair system is on the right and the stress pathway is on the left. Both lanes are fed by pregnenolone.

During the normal state, the parasympathetic nervous system is dominant and Pregnenolone travels down the right-hand lane to make DHEA, which then makes testosterone and estrogen.

However, in a stressed state, the sympathetic nervous system is dominant and the Pregnenolone travels down the left-hand lane to make progesterone, which then makes cortisol.

With less DHEA available the body is less able to make the growth and repair hormones. With less growth and repair hormones it is much less likely that the body will be able to repair lean tissues such as muscle. So if someone’s goal is to add muscle mass or reducing fat, having chronic fatigue will make the job extremely difficult if not impossible.

So if you’re wanting to put on muscle mass and/or get lean, you need to avoid or at least minimize any long-term chronic stress.

In addition to that, cortisol is the primary hormone affecting the immune system and almost all bodily functions. When cortisol and DHEA are working correctly in harmony, the body is in a normal state of adapting to stress.

However, when cortisol and DHEA are not in harmony, the body is in an abnormal state of adapting to stress. This leads to a cascade of bodily systems becoming compromised, leading to immune, hormonal and metabolic system breakdown. 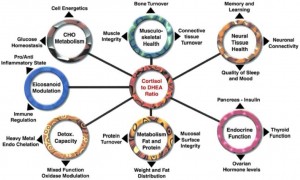 In particular, the systems of carbohydrate metabolism, musculoskeletal health, neural health, endocrine function, fat and protein metabolism, detoxification, immune regulation and inflammatory states are all affected. All these systems have a direct affect on building muscle mass and reducing body fat levels.

SO YOU SEE, GETTING INTO SHAPE IS SO MUCH MORE THAN CALORIES IN VERSUS CALORIES OUT!

As I’ve already pointed out, exercising too much and not eating enough are both stresses on the body. When a body cannot adapt to the stresses it is under, it causes a cascade of failing systems that are all required to build muscle and reduce fat.

Calories do count, but they are just one component in a much larger system.

Stay tuned for Part 4, when I will show you what you need to do to overcome or prevent adrenal fatigue and help you to reduce body fat levels…